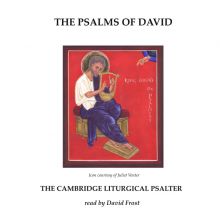 First published in 1976, The Cambridge Liturgical Psalter is a modern English-language version of "The Book of Psalms", prepared for public and private worship by a panel of eight Hebrew specialists drawn from various Christian traditions, working over a period of six years and in collaboration with a single literary scholar who was conversant with the long tradition of translations into English of this ancient Biblical text. It is here read by the maker of the English version, Professor David Frost. Excerpted in a Penguin classic, "The Psalms in English" (1996), as one of only two versions chosen to represent the best of the twentieth century, it went into six national prayer books, was bound up as The Liturgical Psalter in "An Alternative Service Book 1980", and was authorized for use in various Churches world-wide. It remains a version licensed for use in the Church of England. The Cambridge Liturgical Psalter (so re-named to distinguish it from an American Roman Catholic version of the same name which had its imprimatur withdrawn) represents the best modern understanding of what is on occasions a very difficult Hebrew text. It is recognized by Jews and Christians alike as an honest and reliable translation. 1. Language: English. Narrator: David L. Frost. Audio sample: http://samples.audible.de/bk/acx0/020604/bk_acx0_020604_sample.mp3. Digital audiobook in aax. This audiobook is the first book in the new academic book series, Hermit Kingdom Studies in Christianity and Judaism, which seeks to encourage advancement of knowledge in the area of Hebrew language studies, Jewish historical studies, and Early Christianity/New Testament studies. The academic series particularly encourages the use of interdisciplinary approaches and creative thinking. Hebrew, Jewish, and Early Christian Studies: Academic Essays by Heerak Christian Kim contains six academic papers. The academic papers represent fruits of academic research conducted in a period of 10 years in three countries in three continents: Israel, United States, and United Kingdom. The research was conducted under the auspices of some of the world most prestigious fellowships, such as the Lady Davis Fellowship and the Raoul Wallenberg Scholarship. Heerak Christian Kim researched with some of the world's greatest minds - at the Hebrew University of Jerusalem, Cambridge University, and America's Ivy League universities. Some of the papers in the collection were delivered before an academic audience in important academic conferences (Society of Biblical Literature, British New Testament Conference, and American Schools of Oriental Research) and represent cutting-edge research in the respective field. The essays show erudition. But more importantly, some of the creative ideas contained in the audiobook represent potentially a strong force of change in methodology and academic consensus in the area of Hebrew, Jewish, and Early Christian studies. This audiobook is aimed at specialists in the field and can be used as a text book for college courses in the area of Hebrew, Jewish, and Early Christian studies. This audiobook would be beneficial and helpful for clergy and informed laity who want a more serious study of the Bible, Christianity, and Judaism. 1. Language: English. Narrator: Jonathan Mumm. Audio sample: http://samples.audible.de/bk/acx0/015531/bk_acx0_015531_sample.mp3. Digital audiobook in aax.

This volume continues previous DLES proceedings books, presenting modern developments in turbulent flow research. It is comprehensive in its coverage of numerical and modeling techniques for fluid mechanics.After Surrey in 1994, Grenoble in 1996, Cambridge in 1999, Enschede in 2001, Munich in 2003, Poitiers in 2005, and Trieste in 2009, the 8th workshop, DLES8, was held in Eindhoven, The Netherlands, again under the auspices of ERCOFTAC. Following the spirit of the series, the goal of this workshop is to establish a state-of-the-art of DNS and LES techniques for the computation and modeling of transitional/turbulent flows covering a broad scope of topics such as aerodynamics, acoustics, combustion, multiphase flows, environment, geophysics and bio-medical applications. This gathering of specialists in the field was a unique opportunity for discussions about the more recent advances in the prediction, understanding and control of turbulent flows in academic or industrial situations.

After Surrey in 1994, Grenoble in 1996, Cambridge in 1999, Enschede in 2001, Munich in 2003 and Poiters in 2005, the 7th Workshop, DLES7, will be held in Trieste, again under the auspices of ERCOFTAC. Following the spirit of the series, the goal of this latest workshop is to establish a state-of-the-art of DNS and LES techniques for the computation and modeling of transitional/turbulent flows covering a broad scope of topics such as aerodynamics, acoustics, combustion, multiphase flows, environment, geophysics and bio-medical applications. This gathering of specialists in the field should once again be a unique opportunity for discussions about the more recent advances in the prediction, understanding and control of turbulent flows in academic or industrial situations.

The twelve essays in this volume deal with major achievements in German short prose published between 1810 and 1978. Most of the texts studied are Novellen , and there is a concentration on the first half of the nineteenth century, the period in which this form flourished in Germany. The works covered range from Goethe's Novelle , a title straining for exemplary status, to Walser's Ein fliehendes Pferd , the best example of Novelle form in the late twentieth century, as important for its social and psychological commentary as for its subtle characterisation and skilful arrangement of motifs, features in which the Novelle has tended to excel. The earliest landmark is seen as Kleist's strange 'chronicle' Michael Kohlhaas , which showed German writers a completely new way of telling a story, and this is followed by essays on works which all attempted something new in the history of short fiction. Authors dealt with include Eichendorff, Heine, Büchner, Grillparzer, Droste-Hülshoff, Keller, Hauptmann, Thomas Mann, and Kafka. These essays, all by specialists in the relevant field, were originally delivered as lectures in the University of Cambridge.

This volume identifies twelve major poems in the history of German literature and places them firmly in their literary historical context. These 'landmarks' are in three categories: either they are simply great achievements, or they represent turning points, after which poets had to address their genre in different ways, or they are works which embody the major characteristics of a particular period. Although not conceived as such, the volume may be seen to provide an outline history of German poetry from the Middle Ages to post-1945. The contributors, drawn from the Universities of Cambridge and Oxford, are all specialists in the particular field they address.

The contributors to this volume treat fourteen plays of key significance in the history of German literature and show the way in which each dramatist has engaged with important social and theatrical issues of the age. Essays range from that on Lessing's Nathan der Weise (a key text in the history of 'tolerance' in Germany) to Jelinek's Krankheit oder moderne Frauen (a critique of theatrical representation, gender roles and the authority of the text), that is, from German classicism to the contemporary avant-garde. Each major movement in German literary history is represented, and the volume as a whole thus provides a partial history of German drama. The essays, all by specialists in the field, were originally delivered as lectures in the University of Cambridge.

Public demand for comedy has always been high in the German-speaking countries, but the number of comic dramas that have survived is relatively small. Those which are still read or regularly performed all have a serious purpose, and this collection of fourteen essays on the most distinguished of them shows how laughter can be exploited to treat personal, moral, and social problems in a way that would not be possible in tragedy. The texts range from the seventeenth to the late twentieth century, and no fewer than half of them are by Austrian writers. The contributors show how these plays are often subversive, regularly arousing an uncomfortable, self-challenging laughter, and how they treat such widely ranging subjects as language and communication, the complications of the sex drive, the inflexibility of the Prussian mind, and the behaviour of Austrian celebrities during the Third Reich.The essays are all written by specialists in the field and were originally delivered as lectures in the University of Cambridge.